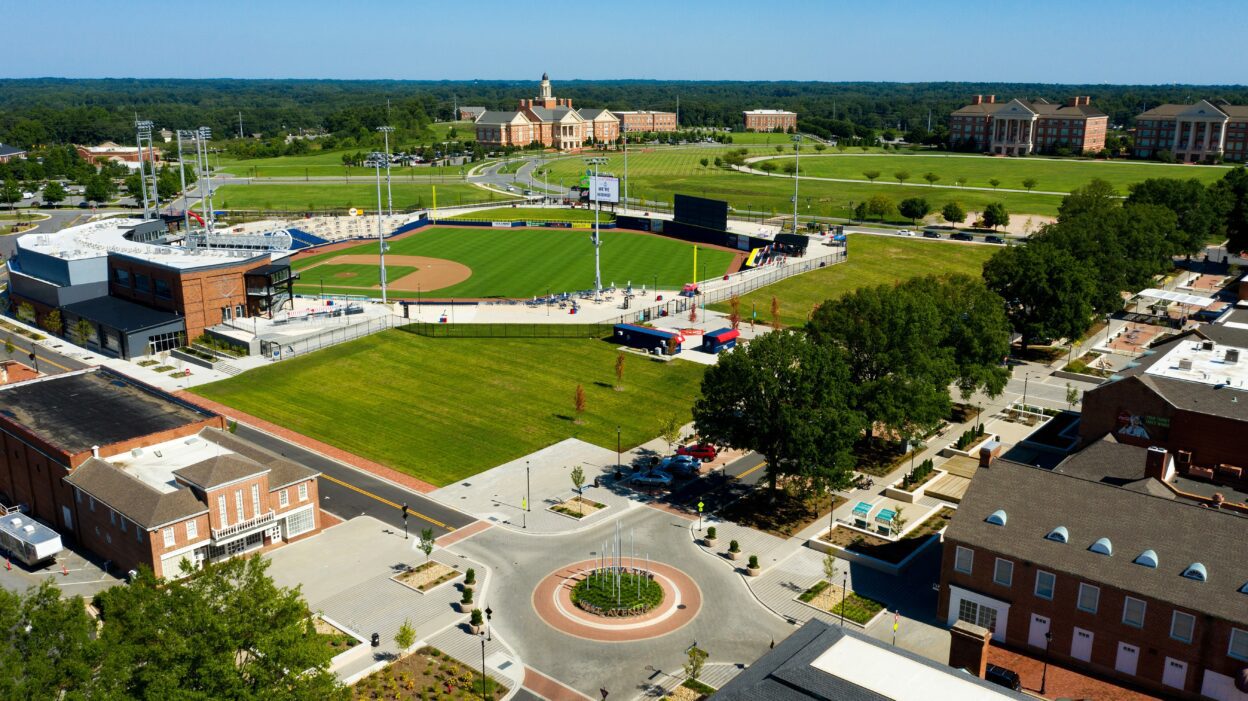 Following a period of devastating economic conditions due to the closure of the city’s dominant employer, Kannapolis set out to invest in the health of its economy with the Kannapolis Downtown Revitalization Plan. City Council took the initiative to purchase the entire downtown – approximately 50 acres and eight blocks of buildings through private and public partnerships. Understanding that a prosperous and vibrant downtown depended on investment in an anchor project, the City chose a sports and entertainment venue as the centerpiece to stimulate the most spinoff growth in the restaurant, retail, and residential sectors. Barton Malow was hired as the construction manager for the first two phases of this Kannapolis redevelopment.

The City also understood the need to reimagine the remainder of the downtown area with infrastructure and streetscape improvements (Phase I). This included the replacement of aging and undersized utilities such as water, sewer/stormwater, and electricity to prepare for the surrounding development. The new unique streetscape serves as an urban park, with green spaces for activities such as concerts, arts, recreation, classes, and outdoor dining. There are also relaxation areas and interactive water features.

Atrium Health Ballpark (Phase II) is the new home of the Kannapolis Cannon Ballers, the White Sox affiliated Minor League team. The sports and entertainment venue serves as the primary catalyst to draw people downtown. The 4,930-seat venue hosts concerts, festivals, conferences, and serves as a continuation of the new urban park streetscape, open every day to citizens of Kannapolis.

Overall, the project is expected to bring over $370M in private investment to the city, with over $191M already committed.

The client sought out partners who shared in the city’s entrepreneurial, innovative spirit. To bring the city back to life, the entire team took a transparent, hands-on approach and focused on the community’s needs first. This resulted in a high level of trust between the many stakeholders and the project team. Each team member was empowered to take ownership of their roles, which erased the often-adversarial nature of the design and construction industry. With inherent trust and collaboration, the project execution was better identified as Integrated Project Delivery and described as one of the most successful projects of the team members’ careers.

Barton Malow worked closely with us for four years to bring both of these projects to fruition. Their staff worked with the constraints of existing businesses, changes in design and scope as our City Council adapted plans to fit the evolving needs of the downtown district, demolished buildings and all of the usual opportunities that occur when redeveloping a major corridor of a City. The project was completed on budget and slightly ahead of schedule.

This project was truly a great example of partnership and creativity. Professionalism, honesty, and fun are three additional words that help summarize this project, and I’m excited about what opportunities lie ahead for our city. Kannapolis is now home to one of the best minor-league ballparks in America, and each of you made that possible. I developed a lot of great friendships on this project and I’m proud to have had each of you on this journey. 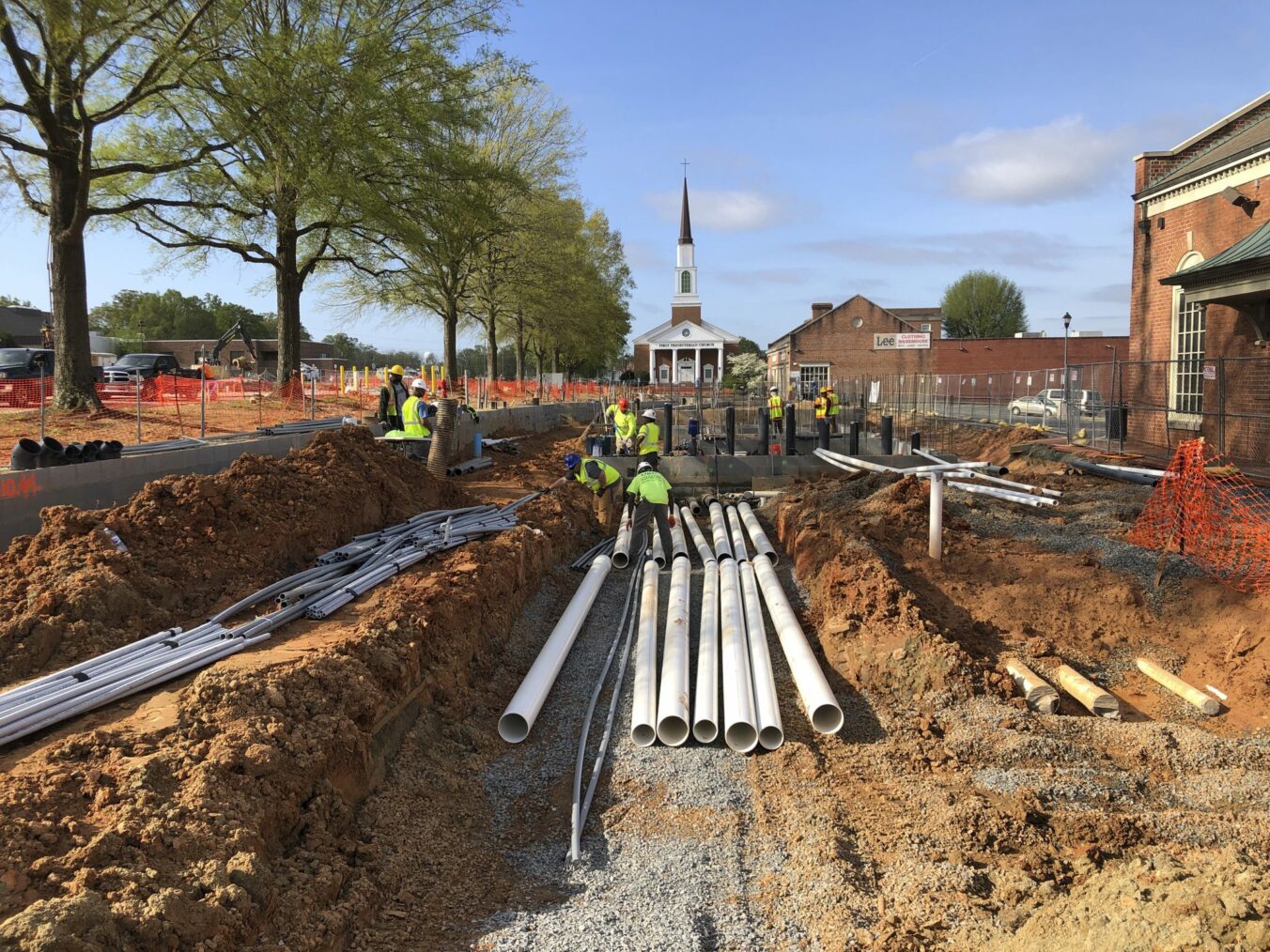 In collaboration with the designer, Barton Malow investigated existing stormwater and sanitary utilities for re-use, identified unstable soils and rock to understand risk, and determined a hardscape design that would maximize efficiency while maintaining that ‘wow’ factor. 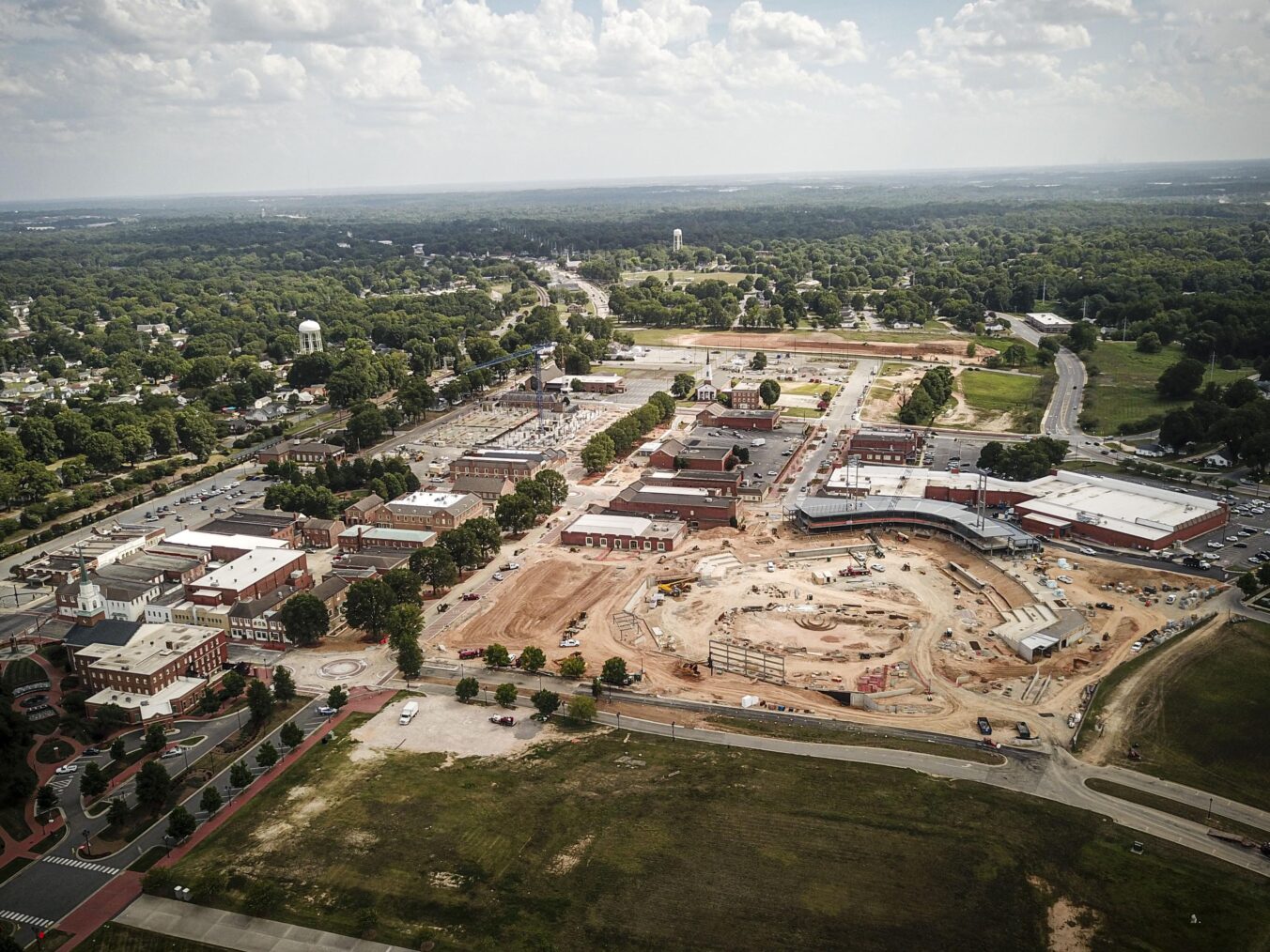 The Kannapolis Downtown Revitalization project required a collaborative effort between the city, Barton Malow, and designers that ultimately culminated in the completion of a major milestone in Kannapolis’ rebirth. 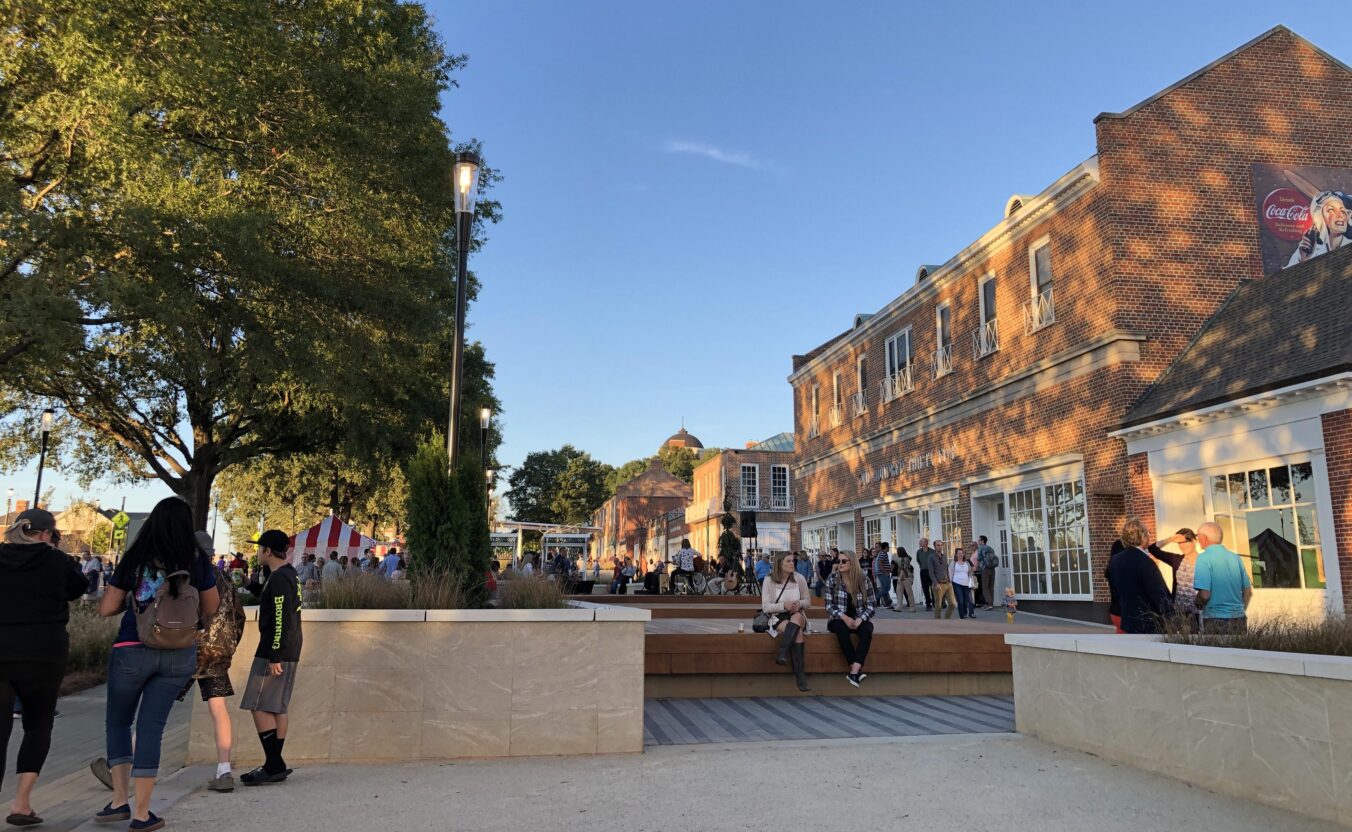 The vibrant linear park along West Avenue creates a memorable and authentic experience, cultivates new traditions, and attracts a multi-generational community. The new space respects the historic integrity of downtown Kannapolis by leveraging existing assets such as landmark buildings and mature oak trees. 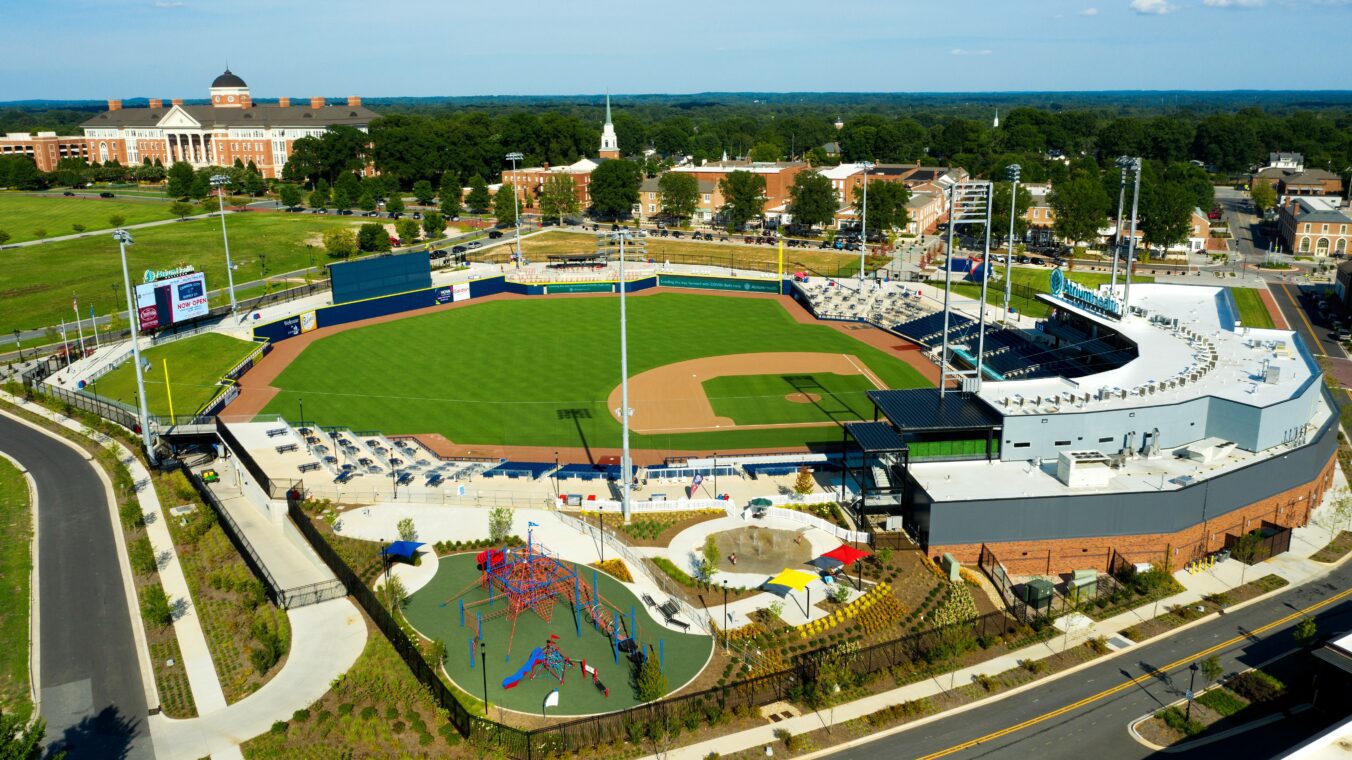 The 20,000-SF Kid’s Zone has a rope-and-cable play structure on site - one of only two in North Carolina - as well as a passive water features that include 16 foot-activated nozzles spraying water. 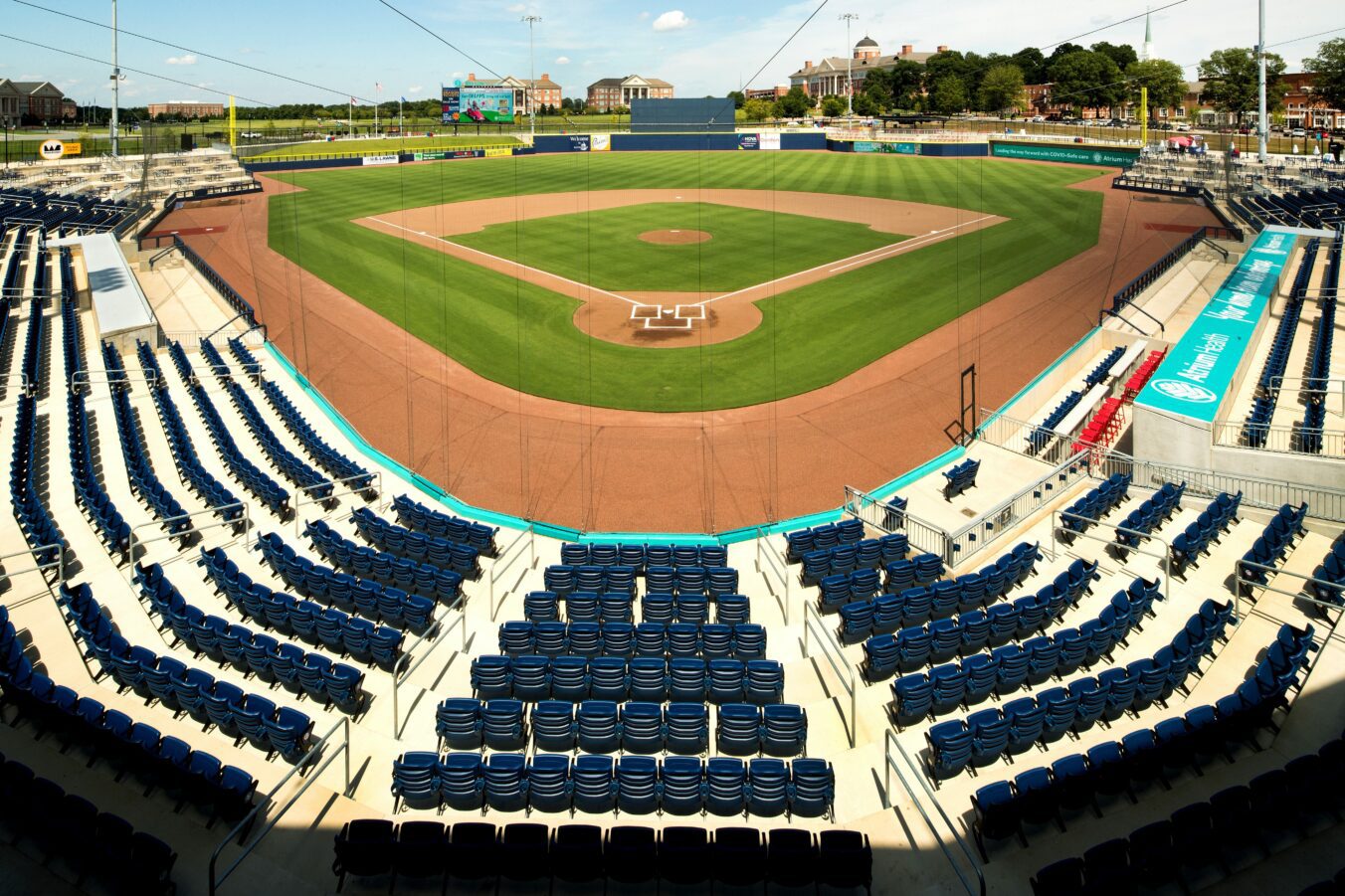 Looping the 360-degree concourse is the Atrium Health walking track, a third of a mile circuit complimenting the City of Kannapolis’ “Loop the Loop” Program which is part of the City's Discover a Healthy Life Initiative and the Cabarrus Health Alliance REACH program.